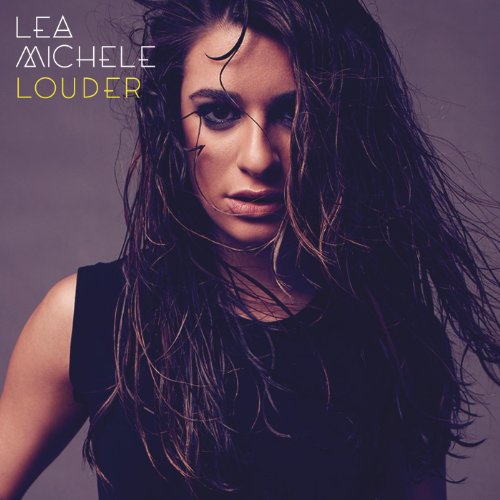 A spotlight shone brightly on Lea Michele from the opening scenes of FOX’s television musical juggernaut Glee when it premiered in 2009, as she took the female lead role of talented McKinley High School student Rachel Berry. The diverse musical experience of Michele and the other cast members going into the show — as well as the logical desire for mass commercial appeal — resulted in an amalgamation of many genres and decades of music being covered on the show, leading to record-breaking Billboard chart success. Now faltering in its penultimate fifth season, Michele is expanding to new projects, beginning with an attempted career as a solo pop artist with the release of debut album Louder.

While Michele received critical praise for her Broadway-infused performances on Glee, much of that influence is stripped on Louder in favor of pop music with light, diluted dance beats and overwrought emotion. Though Michele and team assembled a formidable army of esteemed pop songwriters and producers, including Sia, Ali Tamposi, Matt Radosevich, and John Shanks, very little of the pop material on Louder feels like a natural fit for Michele’s Broadway-trained belts. The upbeat pop production on songs like “On My Way” and “Burn With You” forces her voice to squeak as she fights against rising waves of synthesized beats. With more careful arrangements, such as those the Broadway-leaning “You’re Mine” (one of four Sia co-writes), “Cue The Rain,” and “Empty Handed” (a Coldplay-resemblant number on which Christina Perri shares writing duties with Shanks and David Hodges), Michele’s stellar set of pipes is able to shine through. While there are more vulnerable moments as well, such as the tender “Battlefield” and personal album closer “If You Say So,” which Michele wrote with Sia and Chris Braide, they are so few and far between and so oddly sequenced in the narrative of the album that they feel like afterthoughts, a skin that Michele has shed on her way to stake her claim as a pop powerhouse.

Louder certainly has its fair share of earworm melodies, and it is hard to deny that Michele is an extremely talented vocalist. However, the material that she presents as her solo debut squanders her potential and tries to place her in a mold where she does not naturally fit. As a result, the album comes across as a heavily-calculated attempt to commandeer her popularity among the young but rabid Glee fanbase into the same type of catchy, accessible, mainstream-leaning pop that propelled its cast onto the Billboard Hot 100 so many times — and it’s no more believable than the show’s sudden bursts into fully-produced fun. or Journey hits in the middle of a high school classroom. As Michele sings in “Burn With You,” “there’s a white light and it’s calling me” — but it’s the light of the Great White Way that beckons to her, rather than the spotlight at a pop concert.